I’m a bit late with this, so imagine where I’m going to be with my taxes this year. I’m recapping last year’s writing accomplishments. I managed to complete a novel that’s taken far too many years and it’s off making the rounds. 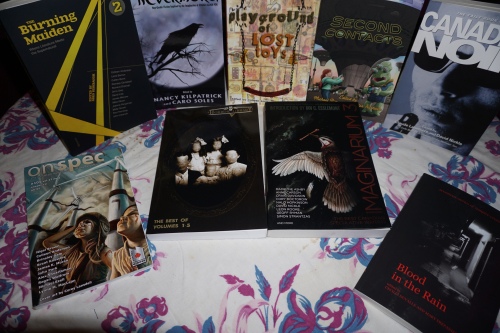 Last year was very busy. How busy? What do all the books in the picture above have in common? Why, I’m in them all. The biggest project was Playground of Lost Toys,  and I’m pleased to say that Ursula Pflug and I (co-editors) are nominated for an Aurora Award in Best Related Works for the anthology, published by Exile Editions.The books to the left and right are nEvermore! Tales of Murder, Mystery and the Macabre, and Second Contacts are also nominated. My story “Asylum” is in the first and “Scar Tissue,” written with Rhea Rose in the second.

Burning Maiden Vol. 2 published three of my poems, “As I Sleep,” “Medusa” and “Tea Party,” and On Spec published my poem “The Hedge Witch” along with an interview of me, which actually came out in January though it says summer 2015. Those weren’t the only poems: “Visitation: Leda’s Lament” was in the HWA Poetry Showcase, “the moon: Fever Dream” was in Pantheon magazines Nyx issue, “Morrigan’s Song” was in Heroic Fantasy Quarterly #24, “Persephone Dreams: Awakening” was in Eternal Haunted Summer’s summer issue, and “I Dreamed A World” was published at Polu Texni. This last poem is also nominated for a Rhysling Award (SF Poetry Association) in the long form category. (Clicking on any story or poem title will take you to the actual piece.)

So, yes, it was a very busy year. On top of that I wrote 33 new poems for a collection contest, only to find the publisher had been sucked into a vortex and disappeared. Now I’m shopping that around as well.

This year has started out busy and successful and I have several more projects brewing but I’ll save these for another post.