Clockwork Canada is available on Amazon and through Exile Editions. Steampunk stories about Canada’s revisioned history.

Fall is definitely falling here in Vancouver, with days on end of rain, rain and more rain. Twenty-eight out of thirty-one days, so what’s a drenched soul to do? Many things have happened, including trips and busy busyness. I’ve been lax with this blog so I’ll do an update on fiction and poetry. I’ll mention briefly that I went to the UK in Sept./Oct. and to British Fantasycon by the Sea in Scarborough. Adventures with writers and others, but that will be a post that I hope will happen soon. In the meantime…

The World Wildlife Fun just mentioned this last week that many species are in rapid decline. This is happening to birds, fish, mammals, amphibians and reptiles and by 2020 they estimate we’ll have lost two-thirds of all species. This is catastrophic and heartbreaking. The only species that won’t be in decline are humans and insects. Many of these other species control the insect populations and with even  just a few being out of balance we’ll be overrun in a short time. When I wrote “Exegesis of the Insecta Apocrypha” I researched this buggy phenomenon and it was frightening in its own right. That story was reprinted last year in the Best of Horror Library Vol. 1-5. In relation to this topic is m story “Freedom’s Just Another Word” about the last elephant on Earth. It can be read for free at Agnes and True and came out earlier this year. I hope that we’ll wake up before it’s too late and realize that by saving these species we will save ourselves. 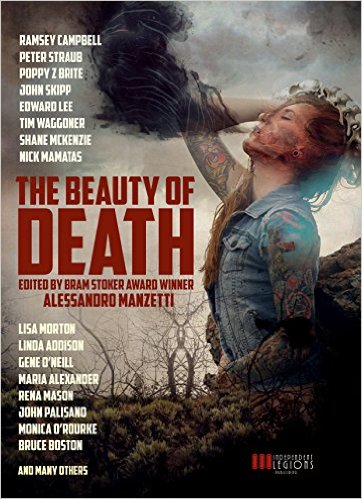 The Beauty of Death, edited by Alessandro Manzetti.

“Buffalo Gals” came out in Clockwork Canada in the spring and is an alternate history steampunk tale about BC’s early history. I touch on the murdered and missing women which has been part of BC’s and really, the whole country’s news for quite a few years. I have a feeling that if other countries started looking at their stats we would see a lot of the same; more women murdered or missing, as seems to always be the case. As well, “Seasons End” came out in the massive Beauty of Death. This story too touches on the decline of the environment but from a more mythical aspect, with hope woven in. On a lighter note, there were two drabbles (100 words exactly) up at SpeckLit but they are no longer drabbling so these are in the archives.

Stories sold and yet to come out include “Love in the Vapors” in Futuristica Vol. 2, “Awaking Pandora” in the Goethe Glass anthology about climate change (yep, another environmental tale), “Shoes” to be reprinted in Polar Borealis 4, “Changes” in Deep Waters #2, and “Sins of the Father” (a fungal horror story) in OnSpec. These will probably all be out next year. There are a few others in the works but I can’t announce those yet. I should also mention that Playground of Lost Toys, edited by Ursula Pflug and I, was nominated for an Aurora Award but didn’t win. Several of the authors were nominated for various awards and Catherine MacLeod won the Sunburst Award for short fiction with her tale, “Hide and Seek.”

There have been many poems this year so I’ll just list these: “The Hedge Witch” in OnSpec #101 (plus and interview), “Book of Shadows” in Devolution Z #8, “Patchwork Girl” in Future Fire #37, “Pilot Flight” and “Short Sighted” in Polar Borealis #2, “Triptych (Amsterdam)” in Wax Poetry #11 (4th place), “Come and Go,” “Oh You!”, “Cuntipotent,” “Cremating Love” in Maple Tree Literary Supplement #21, and “The Persuaders” in Heroic Fantasy Quarterly #29. About to be published are: “A Good Catch” in Tailfins and Sealskins (UK), “Garuda’s Gamble” in Heroic Fantasy Quarterly #30, “Mermaid” in Spirits Tincture #2, “Wolf Skin” in Myths and Fables, “This Song” in Deadlights, “Spirit Bottle” and “Geomystica” in the summer solstice 2017 edition of Eternal Haunted Summer. Many of these are free to read online so Google away.

I hope to post again next week with the first part of m UK trip, which involves writers and editors, and saving someone’s life. I’m also hoping to revamp this blog in the next few months and there will be some book give-aways. So stay tuned to my sporadic posts.