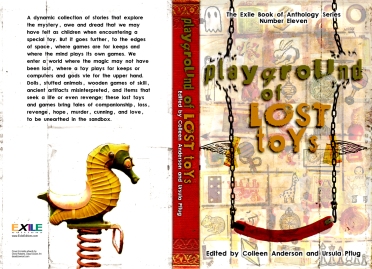 My busy year has been full of many things, writing or other. Playground of Lost Toys, co-edited by Ursula Pflug and me, is up for an Aurora Award. The winners will be announced in August at When Words Collide in Calgary. I’ll be there, on several panels, a reading I think, and a blue pencil session where you can sign up and have a few pages edited by me. And kudos to authors in the anthology who have been nominated for other awards. Karen Abrahamson’s story “With One Shoe” was shortlisted for an Arthur Ellis Award, and has been longlisted for a Sunburst Award in short fiction. Catherine A. MacLeod’s “Hide and Seek” and Dominik Parisien’s “Goodbye is a Mouthful of Water” are also longlisted for the Sunburst.

And mentioning Dominik Parisien, editor of Clockwork Canada also published by Exile Editions, my story “Buffalo Gals” is in the anthology. Airship Ambassador has done a four-part interview with me about the story (and with other authors as well). The first part is here and you can click in the right column of the site to get the other parts as well.

Clockwork Canada is available on Amazon and through Exile Editions. Steampunk stories about Canada’s revisioned history.

Other fiction that has been published this year includes “Freedom’s Just Another Word” free to read at Agnes and True, “Mermaid’s Curse” and “Paul Bunyan’s Toils” at SpeckLit. These two are drabbles, which means they’re 100 words exactly. They were fun to write and good practice for having the purest essence of a story. And just hitting the shelves for pre-order now is Alessandro Manzetti’s anthology Beauty of Death, which includes my story “Season’s End.” It’s chock full of stories and I quite like the cover.

The Beauty of Death, edited by Alessandro Manzetti.

Earlier this year saw my poem “The Hedge Witch” come out in OnSpec along with an interview (that’s two interviews in a year), and “Book of Shadows” in Devolution Z #8. More recent, “Beltane Fires” came out in Eternal Haunted Summer’s Spring issue, and “Patchwork Girl” has just been released at The Future Fire. And two more poems “Short Sighted” and “Pilot Flight” have been released in Polar Borealis #2. Most of these poems and stories are free to read on the net so go and read great fiction and poetry and discover some new authors.

I have many more irons in fires, with more poetry and stories coming out this year but I’ll leave that for another post. I can say I’ve received approval to edit another anthology but it will be another year until you see info on that. In the meantime, I’m working on a poetry collection, and a fiction novel, and was honored to be one of the judges for Exile’s Carter V. Cooper short fiction prize. The longlist can be seen here. Gloria Vanderbilt will now choose from that list.

I’m diving back in to more fiction as well, so away I go. And if you’re a writer, don’t stop, never give up. Every skill takes practice and practice. I’m still practicing my craft and getting better all the time.