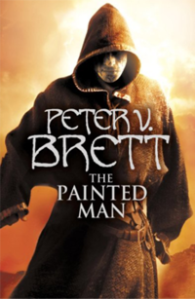 The Warded Man was released in the US in 2009, Harper Voyager imprint

The Warded Man by Peter V. Brett came out in 2008 in the UK (as The Painted Man) and 2009 in North America. It’s the first of the Demon Cycle. Yes, there are spoilers.

This fantasy takes place in world that once had the age of science but something happened and demons from the core (of the world) materialized every night, bent on destroying humans. Small villages and hamlets use wards on posts and homes that keep the corelings at bay. Everyone knows how to ward, but some are better than ever. If a ward is drawn wrong, or gets marred, it leaves a way in for the corelings to destroy everything. Larger towns have warded boardwalks  so one can cautiously get place to place but pretty much the night is owned by the corelings.

The “free” cities are encircled by huge stone walls, with the streets lined with stone. Everything is warded with sigils by the guild of warders, and demons rarely get in. But still people only very carefully venture into the night. This leads to an isolated society, where travel more than a day is difficult and people must ask for succor in another place before the sun goes down. The centuries of isolation has lead to various places jealously guarding the wards they use, as opposed to sharing. News and merchandise must still get from town to town and this is left to Messengers and Jongleurs. The jongleurs bring the news and tales and a respite from the terror, with their songs and acrobatics. The Messengers are combinations of merchant, knight and postman and hardened souls used to the vagaries of the night world. They carry portable ward circles, warded shields, weaponry and a host of scars.

The elemental air, rock, wood, sand, water and fire demons. While the wind corelings seemed similar to pterodactyls they are terrifying creatures of nightmare. The story begins with eleven-year-old Arlen, a good warder who witnesses the coring of his mother. The subsequent search for healing lead him on a journey to one of the free cities where he apprentices as a warder and messenger. Over ten years pass in the span of Arlen’s life as he hones his skills, faces betrayals and alienates himself from humankind in his relentless search for the old battle wards and artifacts, and his vengeance against the demons.

Leesha is a young girl, unjustly marred by a braggart fiance and spiteful mother. She apprentices to the extremely old, cranky and mean herb gatherer Bruna. Leesha’s gains independence and eventually travels to help neighboring towns. But she runs into her own hardships and terror when she returns to help her village and the Warded Man rescues her and Rojer.

Rojer lost his family at a young age and was raised by a drunkard jongleur. With his damaged half hand he’s never very good at juggling but is a passable acrobat and plays a mean fiddle. On the road with his master they meet calamity and then Rojer meets Leesha. He has found that the sound of his fiddle can repel the demons and Leesha knows how to make a burning liquid that can injure the previously thought indestructible demons.

While these two have their own threads as they grow and learn their strengths and fears, Arlen is the main focus.He ends up in desert city Krasia, the only place where they actively fight to repel the demons. Arlen hopes to pass on his discoveries of the battle wards but is betrayed by a culture where he is considered an outsider.

Overall I found the story engaging and it kept me reading. The action is clear, but I would have preferred descriptions of the characters to come more as part of the story as opposed to exposition. But the exposition is light. Most of the logic for the warding works. Demons can’t go through stone but can go through wood. The wards have to be in a circle to work on buildings, but you can repel with a ward on an object such as a shield. The battle wards were lost because the demons had been expunged and people forgot. I just don’t quite see how three centuries can go by where people put wards on shields but never put them on swords or spears.

There are two aspects I disliked about this book; one is endemic in many medieval fantasies. Game of Thrones suffers from it as well, even if Aria and Brienneare are exceptions. But they are exceptions in a patriarchal world where women are still chattels and brood mares and expected to be good and silent wives. In many cases, these worlds are styled on our own history, if given different trappings such as species, magic or geography. But I’m getting heartily sick of the role of women always being virgin, mother, whore or sacred warrior (Joan of Arc anyone?). In this way it’s still a man’s world. While Leesha and Bruna are strong women, they don’t step outside the traditional roles. If exploring a patriarchy and the liberation of women was the goal, then this would have been more acceptable.

The other aspect I really hated was the Krasians. They’re a desert nation who put no god before the Creator and the Deliverer is his prophet, where their women are veiled head to foot and outsiders are considered dirt. They eat figs and dates and dress in baggy pants. Medieval Middle East, with not even a veil to disguise it. At this point I threw up my hands. Do terrorists always have to be Middle Eastern? Yes, there are plenty of white-skinned bad guys in this book, but the thin veneer of our world’s cultures made me sigh in exasperation. I knew what the second book was going to be about. The betraying Krasians steal the magic spear and decide to take over the world, delivering people from demons but changing them into believers of the new faith. And the Warded Man must stop the holy war.

I find it annoying to have our world with just a touch of different icing for fantasies. I liked the book well enough and the overall premise of battling these corelings, but I don’t think it went far enough. I’d be tempted to read the second book but I’m not dying to. I saw enough of this world to feel I had a complete story. I’d give The Painted Man three and a half wards. 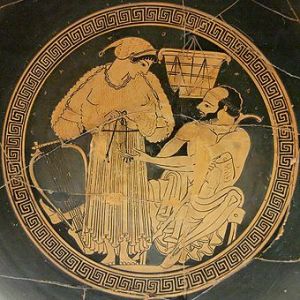 It’s debatable as the oldest profession, but it’s also true that prostitution has been around for a very very long time. And undoubtedly there were probably forms of prostitution going back to Babylonian times. While there are Sumerian and Mesopotamian texts referring to prostitutes there is still great debate as to whether there were sacred prostitutes who gave themselves away for coin at various temples. There are many references to Aphrodite, Ishtar and Inanna, and Herodotus writes about the temple prostitutes for some of these goddesses, but some scholars debate the veracity of his words.

One thing is certain; as long as we have had men and women, there has been a need or a want for sex. And the trade has been plied in various cultures and various ways for millennia. The ancient Greeks differentiated between courtesans, concubines and wives: “we have courtesans for pleasure, concubines to provide for our daily needs, and our spouses to give us legitimate children and to be the faithful guardians of our home.” (Pseudo-Demosthenes) As with this comment it is obvious there were different classes of prostitutes. Pornai were often owned by pimps and therefore either slaves or indentured servants. Then there were hetaera, those we would associate with mistresses or courtesans. They didn’t sell to various customers but would have had a select clientele.

The hetaera could manage their own affairs, while the pornai would have possibly been dancers, musicians and/or women who had to sell themselves to survive because they had no pater familias to protect them. The world of the Greeks was not an easy place for a woman and for her to do anything she needed the protection of a man, unless she was of the select few who could run businesses and own property without a man’s permission (Vestal Virgins were one group in Roman times). Young girls and boys could also have been prostitutes, sold into it or born into it, and the world and culture were different then.

But has it changed much in the world today? Prostitutes who are “owned” by pimps are often still on the lower rung of the ladder, whereas call girls and courtesans rate higher, work with select clients and don’t have to be on the street. There are many people who get into prostitution because they are destitute, on drugs or suffered an abusive childhood (often including sexual assault). But there are some who prefer it, because, like the sacred prostitutes of long ago (some of them), they feel they are therapists, they like it or they enjoy the rewards they can reap, though like any job, work is work. There are those forced into it as child prostitutes. No one, no matter their age or gender should ever be forced to give or sell sex.

But should it be legalized? Yes. To do so would get it off of the streets…mostly (more on this in a minute). Sex workers could be certified, checked for diseases, housed in government brothels (just like cigarettes and alcohol, I can’t see how the government has passed up this opportunity for another vice tax), protected from pimps and dangerous johns. Those on the street would more likely be those underage and the police could haul them and the johns in for consorting with minors. It would literally clean up the streets and keep almost everyone else safer. Of course, there is always a grey area and the laws would have to be explicit as to how the prostitution would look, including laws about minors, people not in control of their faculties (drug addicts) and what is okay. But it can be done and places like Amsterdam and Nevada prove it.

To let outmoded religious beliefs of a few affect the sex trade is yet another case of forcing one’s morality on another. If it doesn’t hurt anyone, then it should be allowed. Let adults be adults and decide for themselves. And let’s do more to protect the numerous women out there so that they’re less likely to end up as a corpse in the woods or on Picton’s pig farm. Keeping prostitution illegal only hurts those who are in the trade and doesn’t even give them a better way out.