The Stones of Ireland: I

In October, 2007 I travelled to Ireland, a place I had wanted to visit for years. I’m not sure why exactly as there is no Irish in my blood and other countries have more and bigger castles. It was more the sense of rolling green hills and the land of faery, a romantic notion perhaps.

We circumnavigated Ireland in two weeks, going north, then west, then south and east, starting and ending in Dublin. There were some key sites we wanted to see but then let ourselves be guided by road signs and guide books.

This was a mostly outdoor expedition involving trips to old castles and monasteries and some cemeteries, as well as driving through the changing landscape. The history of the architecture and how it had changed over time was fascinating, small enclosures and Viking settlements built over with increasingly sophisticated fortifications or ecclesiastical buildings.

Newgrange and Knowth were amazing in that these structures were built over 5,000 years ago and are older than the pyramids of Egypt. Some of the passage tombs fell apart or were scavenged for stones for other buildings and roads. Many of these barrows have a corridor or an interior built with slabs of stone, then dirt is mounded over. Newgrange’s corbeled stone roof has never leaked in 5,000 years. The hummocked hills gave rise to the tales of the homes of the sidhe and the Tuatha de Danan. 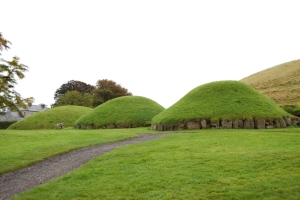 Other barrows were built over with time, dirt being added, and villages or cattle settling upon them. Some of their original use is a mystery but some contain bones or human ashes. Others may have been ceremonial or religious structures. Newgrange is the most impressive as it was built upon a hill and the outer wall lined with white quartz (this was rebuilt in more recent times and there is argument as to how it may actually have been placed), which would be striking in the bright sun and visible for miles around.

Giants Causeway on the north coat of Northern Ireland was a natural structure of basalt rock that had been rapidly heated and cooled millennia ago causing large octagonal pillars to form. They break apart in slabs, maintaining their structure and can be walked over like steps. Some form natural seats or chairs. There is a section called the organ because it looks like a giant pipe organ in the hill. There seems to only be that one area in Ireland that has such unique stones.

The castles and monasteries abounded as well as the very old cemetery of Monasterboice with the millennium old tower (imagine Rapunzel) that they believe was used for storage, sanctuary and to watch for marauders. Some of the carvings on pillars still showed wonderful detail; leaves, faces both animal and human, various designs. Some of the blocks of stone seemed to have been placed with a sense of tone, dark and light stones alternating, or smaller pebbles placed in the mortar between larger stones.

Over the centuries many of these castles and churches fell into ruin but they were not abandoned. Tombs and graves pepper every place. The oldest monastery floors are nothing but tomb after tomb. There is nothing to do but walk over the bones of the past. Even walls have been taken over, a person interred into the very foundation and a plaque sealing them in. The oldest readable stones go to the 1700s. Older than that, the words become too worn away, by feet and weather. There are graves dating over a thousand years in some cases, right up to months of the current date.

Some graveyards have been held by the ruling families or clans and there might be dozens of McDonnells buried in one area such as Ballycastle. Other graves are family plots and in the more modern ones, configured by a low fence, a bar, about six inches from the ground. These more modern plots have pebbled glass or stone in different combinations of color, and some flowers, real or not. Some are very individual. Headstones often denote many generations entombed in the plot, going back a century or more. At one Benedictine monastery there was a family of four cleaning and smoothing the stones of their family’s plot on a sunny day.