The TransLink Plebiscite for Vancouver

We all want better SkyTrain service where it doesn’t break down, people aren’t mugged and it runs as late as the clubs, but at what price. From the http://mayorscouncil.ca/vancouver/ site.

Greater Vancouver is undergoing a plebiscite or referendum (it’s being called both) about whether to increase our provincial sales tax by .5% to cover upgrades to transit infrastructure. It’s becoming quite a fight because TransLink, the arms length governing body (so you can point fingers directly at the provincial government), has had an extremely bad history of providing good and competent governance and spending.

TransLink talked about the Evergreen line (rapid transit trains), scheduled to go east toCoquitlam and environs for twenty-some years. It’s been nicknamed the Nevergreen line. There were plans and then there weren’t plans. They had no money, they did have money. The reasoning changed back and forth. There have been other indications of incompetence which arrived with the firing of the CEO this year and appointing a new one. But now instead of paying for one, they’re keeping the old one on shuffling papers because I’m sure he received an overpriced severance package. How much is the new one working for: $35,000 per month.

The fight for the increase has the “yes” side saying it’s not about TransLink, it’s about making our tansportation better. And while this is correct, TransLInk is still at the help. Let me put it to you like this: If you gave me $100,000 to build you a house and I did but it was a year late, had shoddy workmanship, the windows kept falling out and the sidewalk I promised was still in the works, would you agree to increase the money to me because I promised that the next house would be better? 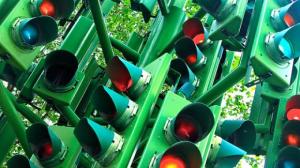 Yes or no for the increases provincial sales tax. From @Doug88888 flickr

You can guess by this that I’m voting an adamant no for the referendum. Here are just some of the points to consider:

Here is a short history of BC provincial tax rates (from http://www.daveobee.com/victoria/20080224.htm)

I’m finding it hard to agree to a tax increase when TransLink is already reaping certain benefits. Another clincher for me is that I looked up fare rates for other large cities and compared them to Vancouver’s. In fact, I believe, geographically Calgary and Toronto are bigger. So if TransLink charges more for transit fares, and we have the highest gas tax, and there’s an exorbitant parking tax, where is all this money going? Click on fares to seem my comparison chart.

And for you to make your own informed decision you can check out the NO side and the YES side. I’m not against improved transit: I am against wasting my money and asking me for more.