News in the Summer 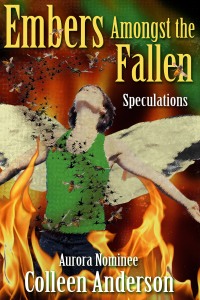 A collection of previously published speculative fiction, available through Smashwords and soon through Amazon.

Okay, it’s been a very busy couple of weeks. I was working hard to get my book up on Smashwords, and Embers Amongst the Fallen is available now there. It turns out that Smashwords, while they say they put it up on Amazon, doesn’t really because Amazon won’t accept from Smashwords. So I next have that to do. 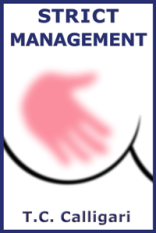 Obvious what this one is about.

Imaginarium: the best Canadian speculative writing has come out through ChiZine Publications and is edited by Sandra Kasturi and Halli Vallegas. Any one who has had published speculative pieces for 2012 can submit to the next one, as long as you’re Canadian, living in Canada or expat Canadian. None of my pieces placed in it but I did received two honorable mentions fro poems:

I did sell another poem to Polu Texni.It’s a villanelle titled “Mermaid” and I don’t know yet when it will be up on the site. As well, just before I left for holidays (hence the big lag in posts) I found out I had sold my flash fiction piece “Lady of the Bleeding Heart” to Fantastic Frontiers for their second issue. Their first issue will be coming soon. 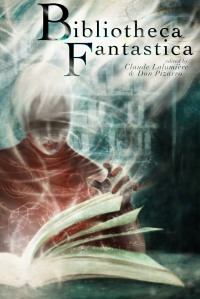 I’m still waiting for another poem to go up at Bull Spec. Better ask them again as it’s been a year. And I think Bibliotheca Fantastica is coming out soon with my story “The Book with No End.” I’m negotiating a contract for a story right now and if we can agree on that contract I will be able to announce that information soon. As well, I will be editing an anthology and I’m just waiting for the moment to announce that, when the publisher gives the go. More details by September. So, yes, it’s been very busy in the writing front, and I’m certainly not done. Rewriting a story, working on several others and of course trying to get more works up on Smashwords in the near future.

The posts were on hold for the last two weeks because I drove from Vancouver to Calgary to visit family, friends and to go to the When Words Collide writing convention. The Aurora Awards were also being presented and I was a nominee in the poetry category. I did not win but Helen Marshall did for Skeleton Leaves and it was well deserved. If you can, go get a copy of this lovely book that is a poem that is a story.

When Words Collide was great fun. Held at the Best Western in NW Calgary, it wasn’t all about speculative literature but there was definitely a large portion that favored this area. The Romance Writers were also present. Panels abounded and numerous authors from across Canada were there to read, be on panels and hobnob. Jack Whyte was guest of honor but had to leave early due to a family emergency. But not before he showed up at a room party wearing a dapper shirt, singing in his deep voice, chatting amiably with his lovely thick accent and flirting with the crowd. I’m not sure he was responsible for all the scotch but he was definitely a major contributor. Perhaps it was the power of his dark sorcery that left a few people looking a little green in the morning.

There were book launches and parties by ChiZine Publications, Bundoran Press, the Steampunk group, Edge Publications and others. I got to meet many new people and put faces to some names. I bought a few books and am currently reading Nancy Kilpatrick’s collection Vampyric Variations.

The weather was hot, the hailstones, when they fell, the size of golfballs & then peas, and the company great. In between all that I made a trip to Edmonton to visit more family. It’s been a long time since I did the long drive out to Alberta. I broke it up by staying with friends in Penticton. Overall the trip was really good and that’s because I saw lots of people and visited with some great friends including Andy Tarrant, the talented artist of Trespasser Ceramics. If you’re looking for a gift, check out his site.

One thing I forgot on my drive, was how beautiful the mountains really are. Rogers pass was filled with blues; azure, indigo, phthalo, navy, and greens: emerald, kelly, peridot, lime, forest and more. The scenery is truly amazing and the weather was perfect. Of course I didn’t stop, thinking I would do this on the way back and then I couldn’t find my camera. I thought I had left it in Calgary until I got to Revelstoke and realized it was in a bag with books. Of course it was too late then. I love the scenery around Merritt as well where it turns into rolling hills spilling out of the Coquihalla, with ponds tucked in between. So lovely. Too bad the drive is so long and a bit hard for me. Next time I might see if I can snag someone to share.

I had limited internet and decided to just enjoy the break. I’m right back in the swing of things now, and on to the new writing projects. I expect to be quite busy this fall, and hope to even get a few readings going where my book will be available for sale. More on the writing front as it happens.

I received my cheque from Shroud magazine this week for my story “Amuse-Bouche,” which means it should be out soon. http://www.shroudmagazine.com/index.html

And I also received word today that Maxim Jakubowski has accepted my story “Stocking Stuffers” originally printed in the Cleis Press anthology Naughty or Nice, for the Mammoth Book of Best New Erotica 8to be published in 2009.

Other than that, writing beyond this blog is on hold. For the CSSF novel workshop in Kansas I have had eight other people’s partial novels to read (up to about 50 pages) and critique. I have one and a half more to do and I leave on Friday. http://www2.ku.edu/~sfcenter/campbell-conference.htm The workshop begins next Monday in Lawrence.

The stories cover a wide range with a medieval epic fantasy, an uplift style SF space race story, two near future SF stories with altered humans (but by very different means and reasons), a world with specially empowered people and angels, an alternate history with Hitler, a magical mystery PI story, and a clairvoyant conspiracy with a mystery. My story falls into a pre-industrial medieval fantasy but on a different world with different species and gods. Overall, we have quite a range and everyone’s story is very intriguing so far.

I’m looking forward to my two weeks of being immersed in the creative medium, which ends with the Campbell Conference.