Today, authors Rhonda Eikamp and Robert Runté. Their tales are both science fiction and involve games of strategy: chess. And while one deals with issues of ego and doing the right thing, the other examines more the consequences of doing the wrong thing, though you could say that in both cases ego blinds the characters.

Rhonda is an American living in Germany and her story was the only one we could accept from out of the country. That meant competition for the spot was very tough and we hung on to a few stories right until the end. Rhonda’s story “The Garden of Our Deceit” is one of the few we received that takes place off planet. It’s far future, as is Lisa Carreiro’s “Makour.”

I was inspired by the call for submissions and Jonathan Carroll’s wonderful quote. Stories of childhood and toys just strike me as the perfect juxtaposition of innocence and creepiness that you can do a lot with in genre (proven by the stories the editors have put together here!). I started out with something slightly steampunky-Victorian, with the idea of giant powered chess pieces, but the focus ended up on the alien corothai and issues of tyranny and freedom.

I wasn’t exposed to chess until my 8th-grade math teacher taught us all and set up tournaments. I’d only played sporadically since, and so I played some online games to get the feel again while writing, which made me realize the corothai would want to hang from the ceiling to get a better view of their tournaments.

I love exploring how alien intelligence and psyches might differ from our own, what the good and bad in being human is and why we will probably never overcome that (and shouldn’t). Would an alien race understand us, our love, relations, humor, the need to play? And I love a good rebellion. I’m interested in how we’re manipulated by those in power, the media, etc. Schools should be teaching kids how to assess what they’re told and how it’s being presented, and to get to the truth. The way news is channeled and selected now, at some point we’ll all be obliviots, knowing only what we want to know.

The takes on the theme here are amazing. Each story puts its own twist on playing or on that long-forgotten item from your childhood. Chris Kuriata’s “Fun Things For Ages 8 To 10” even captivated my refuses-to-read 14-year-old.

I have a story coming up in Pantheon (for which I had to dip into my childhood as well and my memories of tornadoes trying to pick up our Texas house) and a story in Midnight Circus: Age of Legends, which should be out January.

There’s a list of my stories that can be read online, at my (very neglected) blog https://writinginthestrangeloop.wordpress.com/. 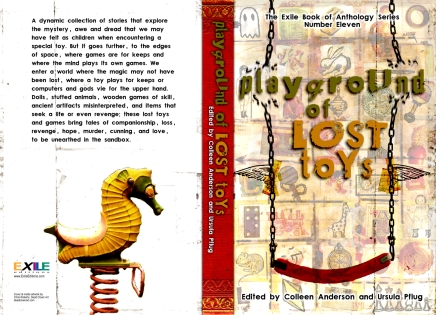 Robert Runté’s tale “Hacker Chess” has a lighter tone but examines well the obsessive nature of games, without always taking in a the bigger picture. It’s an amusing look at our current to near future, when all of our devices are automated, linked and “smart.” Robert chose to answer the questions in a block. Robert’s story is like Geoffery Cole’s where the characters get a little too caught up in their games.

Robert Runte’s “Hacker Chess” is a fun romp in Playground of Lost Toys.

When the call for submissions went out, I had no story, nor any idea for a story that would fit the theme. But I really respected both the editors, and the idea of writing to a specific target appealed to me, so I ended up submitting three stories: the first was too far off the theme; so I wrote the second directly on target, but the editors didn’t go for it; so I wrote the third at the 11th hour, and the editors took that one. That whole process was a lot of fun, actually. And I’ve already sold the first one elsewhere, and the second is off to a CanLit market, so we’ll see.

I would therefore recommend accepting the challenge implicit in writing to a specific theme, however unfamiliar, since that enables one to write several stories more quickly than starting from a blank page. But you have to trust the editors involved: it’s their job to tell you if you missed the target or if the story isn’t up to standard. I knew these two had high standards so that allowed me to play fast and loose, secure in the knowledge they wouldn’t let me embarrass myself.

The second story was right out of my childhood; the first was out of my friend’s childhood; and the third was based on an anecdote told me by another friend. The moral is, anything you tell a writer is likely to be taken down and saved against the day when they can turn it into a story.

“Hacker Chess” is about getting carried away when playing a game, rather than about a specific toy; though we often refer to computers as “toys” when guys get too fixated on having the latest and greatest tech. The main theme of “Hacker Chess,” to the extent that there is one, is recognizing childish behavior, and maybe, you know, to stop doing that. The characters and the world they inhabit are part of several other stories I have on the go, so hopefully I’ll be able to gather them together at some point to create.

The next story I have coming out is “Age of Miracles” in Strangers Among Us, but I am most excited about two books I’ve edited for Five Rivers: Den Valdron’s The Mermaid’s Tale and Dave Duncan’s Eocene Station. Den’s book is the best thing I’ve read in a decade and I consider my discovery of that manuscript the high point of my career so far: it’s going to win every award on the planet. Duncan’s book is SF, something we never see enough of, and the character of Tempest is just brilliant. So, pretty happy about how things are going!

The Gladstone Hotel was were the yearly SpecFic Colloquium was held.

The World Fantasy Convention took place this year in Toronto from Nov. 1-4. I try to attend every couple of years but I feel that it might have been four years since the last one. Before I got to the convention the previous Sunday saw the SpecFic Colloquium sponsored by ChiZine Publications.It was a day of short lectures on the topic “Beyond the Human.” Featured lecturers were Helen Marshall, Peter Watts, Robert Runte, Scott Bakker, Karin Lowachee, and special guest from England Rob Shearman. All the speakers were interesting but Rob’s talk was interesting and humorous and he had us all listening through to the end. It’s worthy checking out for next year.

Pauper’s Pub, an apt place for writers to gather.

I also did a successful reading at the Art Bar Poetry Reading series held at the Pauper’s Pub on Bloor St. (an aptly named pub for most writers). There were four of us as featured readers and then an open mic where people had three minutes to read. Surprisingly most of the open mic pieces were good, something that can be very hit and miss when you don’t know the level of writing. Since it was the night before Hallowe’en I read mostly speculative poetry.

The World Fantasy Convention (WFC) started on the Thursday and is one of several professional conventions and one of three “world-class”conventions. The other two are the World Horror Convention (also professional) and the World Science Fiction Convention, which is large and has an extensive fan track. By professional, it means the convention caters to those in the profession of writing and publishing so there are many authors, editors and publishers present.

Helen Marshall, of Chizine, author of Hair Side, Flesh Side and speaker at the Spec Fic Colloquium.

Correspondingly, there were numerous readings, and panels on various subjects from e-publishing to urban gothic fantasy, the theme of this year’s convention. World Fantasy is capped at around 850 people and the convention had only two tracks and two readings at the same time. Still there were many events I wanted to tend but is often the case at these conventions I was lured into chatting with people and having drinks at the bar. I did listen to Rob Shearman and read a well executed and somewhat sad tale about god, and Cat Rambo read a very bizarre tale about a planet that has porcelain people. I attended one panel on urban gothic but the convention rooms were so cold that I couldn’t sit through a full hour.That was one fault with the hotel, thinking it was still summer. The other was not fathoming that writers drink and being perpetually understaffed at the bar.

Halli Villegas, publisher of Tightrope Books, holding up the awards and banquet menu.

However, as far as the convention went, there were more panels that I wanted to attend than I could get too. The dealer’s room was large and the room parties abounded. Publishers and various groups will host a party at this convention and everyone is invited. The hospitality suite was well decked out with free meals all day and beer and wine in the evenings. I’ve only ever seen this type of spread done at the WFC that took place in Minneapolis. The Chizine party on Saturday night was packed with wall to wall people and even an event I missed called “writers in tub.” You couldn’t move at one point. The party was fairly epic.

I met many people at the convention and for the first time ever, attended an awards banquet, which took place on Sunday afternoon. Chizine Publications was up for a World Fantasy Awardunder the special professional category, but alas did not win. However, while everyone was moving slower on Sunday, it was a very good convention overall, with many new people that I met and great panels. Truly one of the better ones I’ve been to. Check out the World Fantasy convention. It’s a great place to meet authors and publishers. 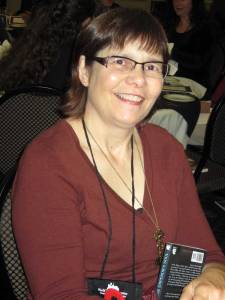 Diane Walton, part of the On Spec collective, a magazine out of Alberta