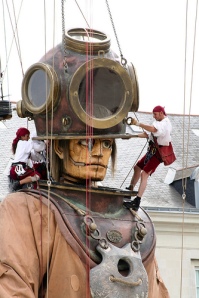 The Sea Diver is about 30 feet tall and was looking for his lost niece. Photo by misterstf flickr

I seriously want to go to Nantes. Where is that? Good question. I didn’t know until a few months ago but then I’m not the biggest brain on geography, especially if I haven’t been there. When I saw an article on a giant spider that was built there, it piqued my interest. Nantes (pronounced nont)  is a tiny place in France, well, relatively so with a population of about 800,000 and sits on the Loire River. It is famed for being an important historic city in Brittany and being the birthplace of Jules Verne.

Maybe Verne’s fertile bed of great imagination, he who was pretty much the father of science fiction, left a seed of creativity that continues to grow. For Nantes is a place of magic. Giants have been seen on the streets and enormous sea creatures are being born. In fact, these creatures have toured to other cities. Marionettes (first the Little Giantess and of late the Sea Diver) as tall as 9 meters have walked the streets. Elephants, spiders and squids of enormous sizes have also been seen.

These animals are like animatronics and marionettes and most of all, amazing works of art. Made of wood, with moving parts and very lifelike in proportions and expressions (except always larger) they are creations of Royal de Luxe and Les Machines de L’ile. The first is a theatrical group that does street theatre and was first conceived in 1979. The pictures of the giant awaking show the scope of the piece and the crew required to move the marionette through the streets. How does one manipulate the “strings” of a 30-foot puppet? By having scaffolding that is even higher.

These amazing pieces are made of wood for the main sculptural elements but various mechanisms and hydraulics are added for the functionality. The related company, Les Machines de L’ile is a factory in Nantes where the creatures are created. La Machine is the performance company that takes the shows on the road, such as in Japan or London where the giant 50-foot spider, La Princesse, crawled through the streets.

François Delarozière is the main designer of the pieces but it takes a large crew to fabricate each sculpture and of course many people to run it. Royal de Luxe’s people all dress in costume, adding to the out of time and place feel. Weighing in at over two tons for the giant or 40 some tons for the Sultan’s Elephant, these works are not cheap to make. They come in at millions of pounds (or Euros), moneys brought about through different cultural mandates, and free to the public. (Indeed one would have to close their eyes to miss seeing these grandiose creatures.)

Some would call these sculptures steampunk, that genre of science fiction that emulates an earlier period of the Industrial Revolution, often in Victorian times, where brass, levers, pneumatic tubes, punch cards, steam and alternative methods of locomotion are the norm. And indeed, there is an essence of otherworldly or of a bordering time that the pieces bring about. The diver harkens back to Verne’s novel “Twenty Thousand Leagues Under the Sea” and is the star of the Estuary Festival, a big thing for Nantes, a long-time shipping port.

Although some critics consider these performance art affairs to be a waste of money I think they are an awesome statement of humankind’s imagination. If we were only to turn our minds to more events of this magnitude and less on how to maim, subjugate or denigrate others, then in truth we would live in a magical world. I would love to see such works as these performed in North America. Jules Verne began reaching into the great unknown of what-if in a different way. The artists of La Machine and Royal de Luxe keep that magic alive.