Clicking on the above picture will take you to the photo album.

After two days in Antwerp, I took a train to Ghent. I stayed at Het Rommelwater and Renee had sent me directions and which station to disembark from. It was a short walk down the major road, where the street curved away. Like Holland, Belgium has many tall narrow buildings and I lugged my heavy suitcase up to the second floor. The room was a double (since renovations were underway outside of the single room), and had a little sitting area and table. Outside the room was a fridge, toaster and microwave for use by the guests. Like many guesthouses, there were maps and information on the city. 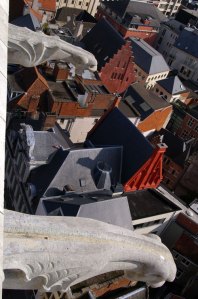 A view from the belfort overlooking Ghent.

I probably could have taken a bus but I walked to the city center along one of the canals in about twenty minutes. The weather was excellent so I didn’t mind the walk and a chance to take pictures. It looked like Ghent was going through a major reconstruction of some of its oldest buildings, which included the  town hall, a mixture of several centuries’ architecture. Some places you cannot get into unless you take a tour so I signed up to see inside the stadhuis. I was the only non-Dutch speaker (Belgians speak French and/or Dutch but it’s called Flemish) so I ended up getting a private tour. This was awesome because I could ask all the questions I liked. The hall is a blend of gothic architecture at one end and the more plain 17th century architecture at the other. As buildings of civic fortitude it wasn’t magnificent but it was interesting. There was even a throne room, with red velvet, a canopy and some ostentation. Supposedly one of the round seats with a cushion on top actually hid a commode underneath.

After the stadhuis I went over to the belfort, constructed in the 1300s. It also was the old cloth hall and this part of Belgium was known for its linen, wool and especially its lace. From the guildhall you could go up the clock tower or belfry, which houses at least four floors including many bells, a giant music box tumbler that controls the carillon bells, and the metal skeleton of the last gilded dragon that adorns the steeple. I decided to walk up all the stairs, that’s 366 or so, although there is an elevator that goes part way up. I stopped in at each floor to read the displays and let myself breathe. At the very top you can lookout over the heads of gargoyle waterspouts in 360 degrees. I took the elevator down, then wandered about the streets.

I did go into Saint Bavo cathedral but after the churches of Holland and Antwerp I was a little oversaturated and it was pretty tame in comparison.  I found Het Gravensteen (meaning castle of the count), which was built in the 12th century. Unfortunately it was so late in the day that it was closed. The castle is not as large as a city block, though it looks impressive and has a tiny moat around it. I would have loved to see the inside as castles were few and far between in these areas. Still, the weather was lovely for wandering along the streets and canals.

When it came time for dinner, there were many restaurants lining the canals. Ghent was my biggest food fail of the whole trip, which included England and Holland. One place was canopied, looking a little better class than some of the other places, and had this variety of shellfish including whelks and cockles. I’d never tried these so I walked in and asked for a table. They told me to take a seat outside and a waiter would be by. As I perused the menu I saw that you received a selection of shellfish for about 35 euros, definitely not cheap. But I waited and waited and waited. I don’t know if there was a prejudice over serving a single person, I wasn’t dressed well enough or the waiter just couldn’t see me sitting there but after 15 minutes with no service I left. 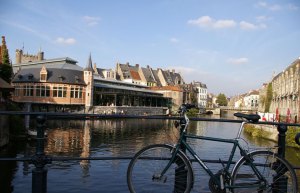 Ghent's canals are wider and fewer than those in Holland's cities.

The next place I chose didn’t work because the menu was almost all fried food. By the time I found a place to eat it was dark. I sat outside since the weather was still fairly mild and decided to try the eel, which I’ve only had as sushi before. The eel was cut in chunks and deep friend, rather tasteless and greasy. It came with a salad and mediocre fries, which is saying something for a country that prides itself on its frites.

I think the combination of all the construction around the cathedral and clock tower, the sad dining experience and some places being closed before I got to them, left me with little memory of Ghent. I was also coming down with a cold. The travel guide said you could do Belgium in two days (if you just hit the highlights) and Ghent could definitely be done in a day. 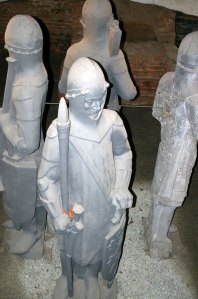 These life size statues were in the bottom most level of the clocktower.