Playground of Lost Toys hit the stores in December and is available on Amazon and through Exile Writers. The holidays and being in no WiFi land put another gap in the posting of these interviews so without further ado, here is Nathan Adler and Joe Davies. Nathan, who wrote “The Ghost Rattle,” gives us a a tale about consequences of mistaking something for a toy.
1. What was your main reason for submitting a story to Playground of Lost Toys.

I’d finished a novel, and wasn’t ready to commit to another large project, so I started writing short stories. The Ghost Rattle fit the theme, so I submitted.

2. Does your story relate at all to anything from your own childhood?

It was important that the teenagers in the story weren’t the good or bad guys, just the run of the mill fuck-ups a lot of us probably were when they were younger.

3. What theme or idea were you exploring in your story. 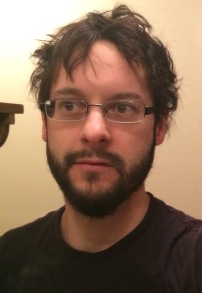 I started out with the idea of having three objects, and three characters, and three ghosts, and how the objects which had once belonged to the dead connected them all together. It was important that the ghosts weren’t purely malevolent, they needed to be as well-realized as the living characters. Tyler’s story-arc is part of a larger narrative that follows the arc of his friends, Dare Theremin and Clay Cutter, and the associated objects and hauntings.

I wanted to tackle the trope of the Indian Burial Ground, which is a pretty common theme in horror movies as the basis for a bunch of scary shit happening, but it’s usually a back-drop without much depth: “Oh yeah, also, this pet cemetery/hotel/house was built on an IBG,” and then never mentioned again. I also had real world events like the Oka Crisis swimming around in my head, which revolved around the construction of a Golf Course on an IBG, and also the flooding of my reserve, Lac Des Mille Lacs First Nation, which unearthed coffins and damaged traditional burial sites.

I think part of mainstream horror narratives is the discomfort settlers have with the reality that this is Indian land, that it’s basically all stolen, and an IBG is this blank canvass for stories of white guilt and fear. So I didn’t want to fall into any of those ways of approaching a story about an IBG with mindlessly angry ghosts. Instead the ghosts have their own histories, and react in very different and unexpected ways.

4.Tells us anything else to do with your story or the theme of the anthology.

The setting of Ghost Lake is part of a larger fictional universe. The story also operates as something of a back-story for the character of Dibikazwinan, as she has living descendants who appear in other stories, and she also has a cameo appearance in a novel I wrote called Wrist, as a minor (living) character in 1872.

5. What other projects do you have in the works, pieces people can buy, or places to find you in the coming year?

My novel called Wrist is slated to come out in the Spring of 2016 through Kegedonce Press, Available for pre-order here: http://kegedonce.com/bookstore/item/73-wrist.html.

I have some of my published writing on my blog here: https://nathanadlerblog.wordpress.com

And I’ll probably be having a Book Launch for Wrist in Toronto sometime in the summer, and doing some readings. And I’ve been working on a collection of inter-related short stories, as well as another novel that follows after Wrist.

Joe Davies wrote “The Compass,” another piece that deals with the consequences in childhood of taking something that is not yours.

The idea for my story, “The Compass,” evolved the way many of my stories do. It began with an image, a moment, in this case two boys pushing their way through tall grass on a bright summer day and that feeling of being young. For me it was an evocative enough moment to build a piece around, but to be honest, I don’t remember the details of the rest of the process very well, or even how the compass presented itself as the lost toy to be. When I write, it feels like what I produce comes together by cobbling the bits and pieces out of whatever I happen to come across while feeling around in the dark. A lot of it may be associative, but if it is, those associations made while writing aren’t usually available to me afterwards when I try to figure out what it is I’ve done.

Joe Davies is the author of “The Compass” where nostalgia and regret play a part.

The genesis of each story is a bit of journey, and a bit of a mystery. The only other thing I can really think of to say about the process is that I know that when I’m writing I don’t try to make a story bend one way or another. I try to respond to what’s happening on the page, to what kind of story it could be, what different directions it could take and to be open to the possibilities. In the case of my story, “The Compass,” I had a couple of details: the image mentioned above, and knowing that somewhere along the way a toy was going to be lost and then found once again. Enough to get a good start.

At the moment I’m working on a couple of projects, both of them short story collections. One is a set of short absurdist pieces where the basic premise or setup of a story gets repeated in another to become a different kind of story altogether. At the moment this project has the ridiculous title Fluff & Balconies (one story of which will appear shortly in The Dalhousie Review; others have appeared recently in PRISM International and Crannog, in Ireland).

The second project is a collection of longer pieces that are derived and spun out of changes happening in our society, for example, the changing roles around gender, and with a particular eye to how men are (or aren’t) adapting. And actually, there’s one other project I’m tinkering with. Lately I’ve unearthed a novel sort of thing I wrote almost twenty years ago, and I’m just weighing the prospect of a rewrite.