Roddy’s troubles are about to begin. Copyright Aardman & Dreamworks (on all images here)

I already mentioned I’ve been on an animation binge lately, as well as a movie binge in general (there’s a reason for this to be blogged about later) and another animation I recently watched was the 2006 British Flushed Away. If you’ve ever seen or are a fan of the Wallace and Gromit films then you’ll probably like this. Wallace and Gromit started as a short animation made with stop-motion plasticine or claymation figures. Wallace is an inventor of the kookiest kind whose kept on track by his faithful dog Gromit. Gromit has the wisdom that Wallace lacks with his genius. Created by Aardman Animations The Wrong Trousers where Wallace ends up in some crazed mechanized pants, won an Academy Award in 1993.

Aardman did several other award winners or nominees and their first full-length animation was Chicken Run in partnership with Dreamworks. Before this they did numerous shorts and TV series in Britain. Flushed Away, while exhibiting the same characteristics of stop-motion, was the first Aardman film done completely by CGI. The ability to rend water properly required this switch. Wiki reports that he production was so arduous and became so expensive that Aardman and Dreamworks split after its production. 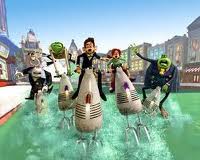 Roddy & Rita are chased by The Toad’s henchmen.

The movie is about Roddy, a pampered pet mouse, who lives a life of leisure in an upper crust mansion. When the family goes out he scampers out of his gilded cage to party. But it’s a lonely life for a solitary mouse who’s invaded by Sid, a fat, slovenly, punked up street mouse. Things go awry and Sid flushes Roddy down the toilet where he emerges into the great underworld of mouse lives in the sewers. Roddy’s terrified and just wants to get home to his cushy life.

Rita to the rescue. The innovative world of the mice makes this a visual delight.

He’s reluctantly rescued by Rita on her tug the Jammy Dodger. It seems that a jammie dodger is a biscuit with jam in it, and it’s a typical aspect of Aardman humor. Rita’s being chased by The Toad  and his henchrats because she’s stolen a jewel. Roddy points out that its fake and earns Rita’s wrath when he destroys it. The adventure ensues with The Toad’s evil plans to destroy the mouse world, his cousin Le Frog helping capture Rita, Rita and Roddy rescuing each other and a lot of shenanigans.

The characters have the classic Aardman features of a wide mouth full of teeth, big ears and round bulgy eyes. The humor is evident both in the dialogue and plot and in the settings and actions as well. This world is so rich with detail that it’s worth seeing a second time just to stare at all the brilliant images. Being a tiny world on a mouse-sized scale, the rodents have created their habitats out of bits and pieces of human discards; pins, bottle caps, broken pottery, toys, lost buttons, etc.  Roddy begins to prove his worth and his intelligence and eventually makes it back to his aristocratic mouse cage…

The cast of characters include Hugh Jackman, Kate Winslet, Andy Serkis, Ian McKellan, Jean Reno and Bill Nighy. While these arefamous names to me it makes not one iota of difference. When I watch animations, I really don’t care if it’s a big star or not. Half the time I can’t even tell who is playing what part. Obviously the studios believe it will sell the movies but I really wonder how many people care. 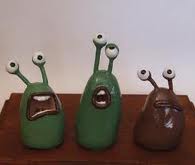 The models for the singing slugs. They add the icing on the comedic cake.

One last thing to mention about Flushed Away. Part of the background characters are slugs that float on lily pads or on other items in the sewers. They have two bulgy eyes on eyestalks, lips and teeth (of course). They shriek at opportune moments but also seem to float by and sink a sappy song at the right or wrong moments. I love the slugs and they’re great filler for comedic moments. I always love the Wallace & Gromit movies though some aren’t as funny as others. Flushed Away was a lot of fun and a pretty good plot,  without Roddy or Rita being the singular hero but a team that worked well together.  I would give this 8 jammie dodgers out of 10.