Tesseracts 17 is now out with tales from Canadian writers that span all times and places.

Today, I give you the last interview of the authors in Tesseracts 17: Speculating Canada from Coast to Coast to Coast, from EDGE Science Fiction and Fantasy. It’s not quite a complete set as I don’t have Vince Perkins from New Brunswick, nor Jason Barrett from Northwest Territories. However, should they eventually contact me I will include their interviews. You can find their bios listed for Tesseracts here. Last in the table of contents and our other Yukon author, is Patricia Robertson.

CA: “The Calligrapher’s Daughter” has the feel similar to tales like The Arabian Nights, or The Steel Seraglio. It mixes lesson and observation but in a subtle telling. Were you following a particular literary form when you wrote this?

I was aware that it was a fable, a form or mode I feel we need much more of as a means of responding to our increasingly nightmarish “reality.” Fables deal with archetypes rather than highly realized characters (which is why the calligrapher’s daughter is called that throughout the story rather than given a name). That said, I was conscious of the form without being inhibited by it (I hope!)

CA: Your world is vivid in description and feeling. What did you research in the process of this creation?

I love exploring worlds I don’t know and have been interested in Islam and Arabic history for a long time, ever since I lived in Spain (where the Arabs ruled for 700 years). I do lots of research in both books and on the Net to get the details right, or, where I’m inventing, so I know I’m deliberately altering or embellishing “reality.” Though I’ve discovered that there’s really nothing you can make up—so-called fantasy is only such in our current idea of what constitutes reality!

CA: We’ve had stories set in the modern world (the majority), a few other worlds and those in far space, with a smattering in the past and the future. Yours is the only setting that looks at Middle Eastern history. Why did you choose this setting and do you think your tale would have been as effective if told from another culture’s point of view?

As I explained above, Arabic history fascinates me (the setting here is actually North Africa). I’d recently written a suite of four novellas/short stories all linked by the theme of illegal migration and set in Spain and Morocco, so I suppose the setting was fresh in my mind. And I’ve always found the Arabic script incredibly beautiful, with its flowing curves. At some point I stumbled on the fact that there were female calligraphers early on in the development of calligraphy as an art form. 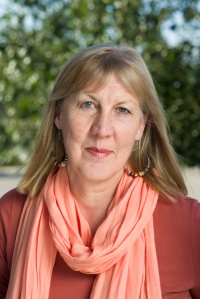 Patricia Robertson creates a world of beauty and values in The Calligrapher’s Daughter.

All of that means I can’t imagine the story from another culture’s point of view! It’s too specific to this one, although I’m sure there were female calligraphers in other traditions.

CA: While following the norms of her society, the Calligrapher’s Daughter manages to find strength of purpose. Do you think that people who are under the strictures of their culture, which may give unfair advantages to some and not to others, can still find a strength of purpose and prevail?

I think people do that all the time. There are always people who, through a combination of talent and tenacity and opportunity, forge lives for themselves that may be unusual or somewhat outside the norm. They usually pay a price for such behavior, too. Researching the story reminded me that history provides much more nuance than we usually see—women in such cultures are not always, in all conditions, “oppressed.” Cracks and byways and interstices can be found, or created.

CA: This was such a rich world. Have you used it in other stories and what will we be seeing from you in the future?

As I said earlier, I love exploring different worlds, so no, I haven’t used this one in other stories and probably won’t use it again. At the moment I’m working on a young adult fantasy called How to Talk to a Glacier as well as completing a third book of short stories. And I have a short adult novel, a fantasy, in mind too.

Born in the UK, Patricia Robertson grew up in British Columbia and received her MA in Creative Writing from Boston University. She has published two collections of fiction: City of Orphans, which was shortlisted for the BC Book Prizes (Fiction), and The Goldfish Dancer: Stories and Novellas. Her work was selected for both Best Canadian Stories 2013 and Best Canadian Essays 2013, and has been shortlisted for the Journey Prize, the CBC Literary Awards, the Pushcart Prize, and the National Magazine Awards (three times). She is currently the first writer-in-residence at the Kingston Frontenac Public Library in Kingston, ON.

A discussion of revisionist writing came about on another list when I mentioned that I had sold my poem “The First Taste” to Dreams & Nightmares. It is a revisionist poem about Persephone. I was asked what I meant by revisioning. A good question because the term is probably most often used in terms of history and politics. But on the other side are the revisionist myths or fairy tales. Some will come tagged with feminist revisionism but it goes beyond that.

I ran into revisioning somewhere way back, maybe first to do with the retold fairy tales, especially the ones that were in the Datlow/Windling anthologies. But I was also doing a course on children’s literature where we examined fairy tales right back to Perrault and the Grimm brothers. Angela Carter’s tales came up as some early revisionist fairy tales. I’ve also run into it in poetry but don’t remember when anymore. It could have been in the creative writing courses at UBC or in the world of speculative poetry.

I guess the basis for any revisioning poem is that instead of a third person or narrative tale of a hero’s or god’s deeds, the tale is now told in first person, though third person is also used. It might also be in the voice of the lesser being/mortal/bad guy who traditionally was fairly two-dimensional. This is not always the case with stories, which may also be in third person, but all tend to delve into the psyche of the person and how they feel.

This is sort of what happened to SF when it evolved past the embryonic stage of BEMs (bug-eyed monsters) and started to become more realistic; or magic realism, set in today’s world with just a small twist of otherness. (Is this the bastard child of canlit and spec fic?)

Like all genre labels, revisioning is just another fancy word for categorizing what we write. 🙂 In my revisioning poems (which really is just a classic tale, whether fairy tale or heroic myth, from another point of view) I’ve written on Dionysus, Kore/Persephone, Athena, Leda, Psyche, Demeter, Aphrodite (though the last really doesn’t fit the same way as the others). I’ve also written one story on the oracle on Pythos before it/she became the Delphic oracle.

In stories, I’ve taken various fairy tales and rewrote them as well, from the Princess and the Pea, to Snow White, to Dorothy after Oz.I’m sure there are other takes on revisioning but this is pretty much how I see and understand it. One well-known child’s story done in a revisionist mode is the about the three little pigs but from the wolf’s point of view, pointing out how he was framed.

Classical fairy tales are fairly thin and two-dimensional, offering very little depth into the whys and wherefores. Many fairy tales were cautionary tales, and others were, what academics now presume, tales to show/train young women for their eventual separation from their parents, and subsequent marriages. It is the purview of fantasy and speculative fiction to take the regular world and twist the what-if. If we’re looking at old, tried and true  tales, then it’s turning the story on its edge and presenting a new view.

Whether called revisionist, speculative or just plain fantasy, taking the classics and showing a new perspective is part of the evolutionary process. Fairy tales, myths, fables were once passed down, word of mouth from person to person. The oral tradition actually kept the story current to the times as the teller would adapt or change aspects to suit the understanding of the listeners. The constant evolution means many stories have passed over the lips of humanity to be lost in the trails of time. With the newer tradition of taking those now codified tales, whether Sleeping Beauty or the tale of Eros and Psyche and telling a new story, the process continues to bring evolution to the myths and fairy tales of our ancestors.

Here is a lesson plan on revisionist fairy tales for anyone who teaches about writing and reading: http://www.readwritethink.org/lessons/lesson_view.asp?id=992

Although my family was fairly middle class, my siblings (as well as me) were avid readers. My older brother liked to read about the Napoleonic wars, Roman civilization and who knows what else. He later became a politician in Alberta. He also read science fiction and when he moved out I discovered various SF novels lying around, such as Frank Herbert’s Green Brain. There were other Herbert and Heinlein books and I devoured what I could.

But prior to those pure SF authors, I had fed on fairy tales and Norse myths at a younger age. I remember reading The Water Babies, and one book that illusrated the myths in vivid illustrations. I don’t have that book but I found one by the same author/artists (?–I will fill in the name later) a few years ago in the US and bought it. It was on Greek myths so I added it to my collection: another recovery of the magic from my childhood.

I also read many Nancy Drew mysteries, left by my older sister. My mother bought me new ones and I spent enough nights with the flashlight under the cover reading. There were a few Hardy Boys lying about and I read all of those too, plus some historical and/or romantic fiction that my mother had read.

The true transitional time from fairy tales and Aesop’s Fables to SF and fantasy was when I was about twelve. I had read some Edgar Allan Poe and then went on to Ray Bradbury, and from there straight on to SF & fantasy. I remember having to make a newspaper in grade 7 with other classmates. Our group’s had a decidedly speculative element and I wrote articles or drew pictures of aliens.

Today, my siblings still read voraciously. My older brother still reads about politics and SF, when he has time. My younger brother reads more fantasy. My sister reads true crime and mystery novels. I read SF, fantasy, mystery, historical and literary, from time to time. My mother reads mostly on politics when she reads. She falls asleep more now. I’m not sure what else they read but maybe I’ll poll them.

I guess my fascination with the worlds of what-if began at an early age.