Writing: Awards From a Canadian Perspective 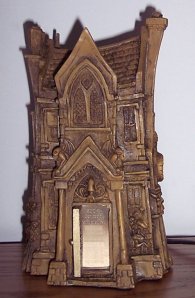 Like every profession, those who excel or are the tops in their field will often receive an award or some form of recognition. How those awards are meted out tend to differ. For writing, the various top awards are given by means of voting by the readers, by members or colleagues or through juries and judges. All of these have merits and flaws. Here is a partial list of some of the awards given out in speculative fiction:

The list actually goes on, and a full breakdown can be found on the Locus magazine site. Descriptions of each are given as well. My curiosity about visibility of Canadian writers and awards came about because the Horror Writers Association sent me and invitation, saying I was eligible. I’d actually been eligible years before when I could have got full pro membership (before they raised the rates) but never did anything about it. Than I found they’ve created a supporting member category for those who are selling but not at a pro rate of which few magazines offer (.5 cents or more per word). Yes, you do not get rich writing speculative fiction,k in most cases.

I was more interested in whether a story/novel published by a small Canadian publisher would ever be noticed enough to be nominated for bigger awards. Obviously some awards, such as the Nebulas, for works published in the US, or the Aurealis for Australian works, might limit this, but then again there are many Canadian authors published in or distributed in the US. I posted my question to our writers’ list and here are some of the opinions.

Gemma Files, published by Chizine Publications, is up for this year’s Bram Stoker for first novel. Other Canadians have won or been nominated for this award in the past, such as Edo Van Belkom, John Little , Nancy Kilpatrick, Robert Sawyer, Sandra Kasturi, Brett Savory, David Nickle, Don Hutchison, Charles de Lint and probably a few others that I missed. Many of these publications were from the US but some were Canadian. Some of the publishers were Canadian as well, while the authors were American. So it looks like, as long as the publications are known of or distributed far enough, Canadian representation is there in the Stokers.

The Hugo nominees, voted on by fans at the World SF conventions, are supposedly from all countries. However, since most World SF cons are in the US and there majority of publishers are there, there will be a tendency to have more US oriented works. But, that doesn’t mean a Canadian isn’t nominated, especially if they’re published by Tor or some other big US publisher. Charles de Lint is a good example and has been nominated over 45 times for Aurora, Sunburst, World Fantasy, Nebula and British Fantasy awards among others. And he’s Canadian.

However, looking back quickly over the last 11 years of Hugo awards it seems there are very few small presses and  none that aren’t American though in fact they have no restrictions on language or country. (I could also be wrong about small presses from outside the US–someone please correct me.)

But when an award is voted on by attending members of a convention or on fans it is a smaller spectrum of the writing avaialabe. It is first limited by a name the fan recognizes or the books they’ve read. This also runs true for member-voted awards of associations such as SFWA or HWA. There is a limit to how much a person can read or what they like. Some people will vote for someone based on the popularity of their name, even if they have’nt read the work. It happens all the time.

Canada’s population is much smaller than the US, and even if all Canadians were published in the US there would be a smaller percentage and a smaller number nominated for awards. Canadian publishers are less likely to be seen by American readers, which also limits the range of available works. But I doubt there is anyone who has read all that is published in a year though I have to give people like Gardner Dozois and Ellen Datlow huge kudos for the sheer volume of stuff they go through. I’d almost say the Year’s Best anthologies are a more accurate collection of written works than any award.

But truth be told, no award will ever really have all of the best authors or stories or publishers. There is always a limiting of the field by various means. But Canadians don’t do too badly, considering, and are holding their own. As we have more digital formats and the universality of the internet we are likely to see more and more authors from all parts of the world.

From Peneverdant
The Tao of Tim