I’m quite blown away by the talent of the writers I’m featuring for Women in Horror Month. Today, another multi-published, amazing writer joins me: Lesley Wheeler. I’m sure you’ll see why she’s been honored so many times.

When did you discover poetry and who/what influenced you?

I’ve been obsessed with poetry since childhood—I always had a strong attraction to the sound of it. Studying Romantic poetry in high school, Modernism in college, and late-twentieth-century poetry in graduate school shaped my aesthetics pretty strongly.

Why do you write poetry?

I can’t help it. When I don’t make time for it, too, I feel bad and even have nightmares. Working centers me and helps me focus my attention like prayer and meditation.

What do you think is the most difficult aspect in writing poetry?

Closure! Finding an ending that is both satisfying and surprising is really, really hard. Sometimes you have to dig into your most uncomfortable thoughts and feelings to get there, too.

Do you explore particular themes? What are they and why?

I’ve always been interested in sound, place, gender, and the question of what’s real (when and for whom, too). The fifth and latest book, The State She’s In, epitomizes those obsessions: it takes on what it means to live in Virginia right now, in light of the state’s terrible history and its beautiful more-than-human features. There are some spell poems—I’m still writing those, maybe for the next book?—although a good share of the horror is political. It’s also about menopause. I’m here to testify that turning 50 has some terrifying moments and can be major hinge in a person’s life.

She careened from kitchen house to dining room,
bare brown feet quick in the frosted yard, crying
of the old woman with her head tied up. Nobody’s
chasing you, Maria, Dr. McChesney chided, helping
himself to a glistening slash of ham. His daughter
Ellen giggled and pinched Maria under the table.
Mean. Also eight years old but freckled as a biscuit.
Free. Maria cast a chilly eye on her, stepped away
from the fragrance bread makes when you break it.
Nobody’s here, she thought, and soon you’ll know it.

A few weeks later, charred rocks began to fall, sharp
as fists, scorching hot. They volleyed against the roof,
blackened grass, cowed the family. Bewildered,
the McChesneys sent Maria to nearby cousins.
She strolled the miles so slow she could almost see bloom
come to the Judas trees, till the final rise. Then twitched
and charged, wailing of witchery. She found the Steeles
already stirred, starring the lawn, their backs to her,
as they stared toward a clatter in their house. A peek
showed furnishings piled up like sticks, of a sudden,
in the parlor, cupboard glass smashed by stones
from nowhere. Mr. Steele commanded her back home.

Now the whole county gossiped. Mischief likes
ventriloquy. If Dr. McChesney peered out the door,
earth-clods pummeled him. His sister, Miz Steele,
kept visiting even when rock cut her scalp to the bone.
Almost dear in her dumb persistence. When Maria howled
of being pricked with pins, slapped by invisible hands,
Miz Steele clutched her in whispering skirts and flailed
to beat off an unholy presence. It didn’t work.
Nothing worked. Her hands as soft as pudding.

Nobody stopped food from going missing, or
the field hands’ tools. Bottles of madeira danced.
Embers jumped from the hearth to bite ankles. The doctor
retreated to his fireless upstairs room, his rows of books
and guilty medicines. In the closet, a skeleton. Whose?

For peace, they sent Maria across water. Not the sea.
The muddy green of the Mississippi, supposed to short
her electricity. Clever spell they conjured, the sale
to Alabama. Some say she fell on the way and died.
Girl with a scar on her head, and what a mouth.

She lasted longer than Ellen, anyhow, who married young
out of the fancy carriage envied by neighbors. Unfolded
those red velvet steps, pranced down, and chronicles
mislaid her. Like Maria, who could negotiate with land itself,
persuade the stones to rise and heat and hurtle
in revolt. There are other powers, better, though
they may not get your name engraved in books. Some say
she acquired them. Returned to haunt the child she’d been,
head tied up in red, to stop the future burning through.

What is it about dark (speculative) poetry that you think attracts people to read it?

The former poet laureate Tracy K. Smith once said something to the effect that we’re metaphysical people. We’re always asking ourselves what’s real, what matters, and other peoples’ answers help us figure out how to live. Speculative literature can be really, really good at giving us new angles on those big old questions. Plus people need song and story to survive.

What projects (publications) are you working on or have coming up?

Aside from the new poetry book, my first novel, Unbecoming, will be published by Aqueduct Press in May 2020. It’s a weird tale involving a changeling and a woman who thinks she’s developing magical powers with menopause. I think it straddles that interesting boundary between so-called literary and genre fiction. I’m really excited to see if people like it. In 2021 I’m publishing an essay collection called Poetry’s Possible Worlds about world-building in contemporary verse and I’m exciting to share those ideas with people, too.

Is there anything else you would like to mention about horror or poetry?

I think the campus I teach at is probably haunted; Robert E. Lee’s crypt is just downhill from my office. It’s haunted by a horrifying history, for sure. 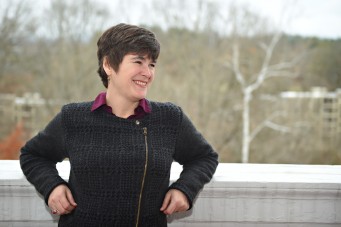 Lesley Wheeler is a writer and professor born in New York, raised in New Jersey, and residing in Virginia. Her first novel, Unbecoming, is forthcoming from Aqueduct Press. Tinderbox Editions will publish her next poetry collection, The State She’s In, in 2020 as well as an essay collection, Poetry’s Possible Worlds, in 2021. She is Poetry Editor of Shenandoah. Wheeler’s previous poetry collections are Radioland (Barrow Street Press, 2015); The Receptionist and Other Tales (Aqueduct, 2012); Heterotopia, selected by David Wojahn for the Barrow Street Press Poetry Prize in 2010; Heathen (C&R, 2009); and the chapbooks Propagation (Dancing Girl Press, 2017) and Scholarship Girl (Finishing Line, 2007). Heterotopia was a finalist for the Library of Virginia Award. The Receptionist was named to the Tiptree Award Honor List and nominated by Ms. Mentor at The Chronicle of Higher Education for an Ackie (both rarely given to speculative campus novellas in terza rima). Her poems and essays appear in Gettysburg Review, Lady Churchill’s Rosebud Wristlet, Cimarron Review, Ecotone, Crazyhorse, Poetry, Strange Horizons, and many other journals. The Henry S. Fox Professor of English at Washington and Lee University, Wheeler has held fellowships from the Fulbright Foundation (New Zealand), the National Endowment for the Humanities, the Virginia Commission for the Arts, and the American Association of University Women. In 2011, Wheeler received an Outstanding Faculty Award from the State Council for Higher Education in Virginia. She teaches courses in nineteenth-, twentieth-, and twenty-first century poetry in English as well as creative writing and speculative fiction.