More news on the writing front, which has kept me seriously busy. 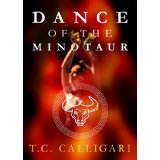 Dance of the Minotaur, by T.C. Calligari

So, in reverse order: I write different types of fiction and have some late summer sizzlers now available. Until Thursday you can get a free download of two books on Amazon.com. That’s right! Absolutely free. They are Crossing the Line: Four Sultry Tales of Submission and Dance of the Minotaur. The second is historically set. Yes, these are erotic tales, so be forewarned. Go ahead and download them (click on any underlined title), spread the word, and if you are so inclined, please leave a review. The kindle app can be downloaded to your computer and you can read them that way if you have to reader device.

New out in the last few months: “the moon: Fever Dream” has just come out in PantheonMagazine’s Nyx issue. Also available on Amazon. “Scar Tissue,” written with Rhea Rose, is coming out in Second Contacts from Bundoran Press and should be on the shelves soon. Another free to read poem is “Persephone Dreams: Awakening” in Eternal Haunted Summer’s Summer Solstice issue.

There are alas, some long delayed works that I’m still waiting to see from Nameless, Burning Maiden, Our World of Horror and OnSpec. I’m hoping those will all come out this year. Other recent works include “Asylum” in nEvermore: Tales of Mystery, Murder and the Macabre, based on stories from Edgar Allan Poe. It’s available on Amazon as an ebook and pre-order for paper, due Oct. 1. The Best of Horror Library Volumes 1-5 includes “Exegesis of the Insecta Apocrypha,” which received an honorable mention in the Year’s Best Horror is doing very well and currently #1 on Amazon in hot new releases.

Yet to come and recent sales include selling “Hold Back the Night” to Blood in the Rain. This is a vampire anthology and my story is a reprint first published in Open Space. It was shortlisted for several awards and received honorable mentions in the Year’s Best anthologies of SF and of Fantasy. I’m pleased it’s going to appear again. I’ve also sold “Buffalo Gals” to Clockwork Canada. Edited by Dominik Parisien, this collection of Canadian tales will look at alternate histories where steampunk redefines the face of Canada. I believe both of these tales will come out last year.

The Playground of Lost Toys has been completed by Ursula Pflug and I. It’s an anthology due out from Exile Editions this November and contains 22 tales about toys and games. They range from humorous to darkly disturbing and from fantasy to SF to horror. I think it’s a good collection that explores toys, games, childhood, nostalgia, loss, love and many other things very well. On top of that I completed my synopses for books 2 & 3 and have sent the whole kaboodle to an agent. I’m trying not to bite my nails. And last, but not least, I’ve written 33 new poems for a poetry book competition. They just need a few more tweaks and I’ll be submitting it.

This is why I haven’t been posting very often. I’ve just been far too busy of late. In October I’m going to the Stanley Hotel Writers Retreat in Colorado. This is the hotel that inspired Stephen King’s The Shining. I plan to start a new novel that will take place in the world of my Evolve story “An Ember Amongst the Fallen” but a few centuries before. I’m hoping I can post a bit more often, so stay tuned for more writing news and just other pieces about stuff. 🙂