I’ve had some interesting comments on the post about genital bleaching. Some people defend it as just another way of decorating ourselves, such as having tattoos or piercings. This is actually inaccurate. While a tattoo or a piercing is a body modification, it is also body adornment or decoration. True, there are some piercings that veer from being only decoration (and used for enhancement of sensations or fetishism–bondage, humiliation, etc.) but for the majority it is about decorating the body in some way. 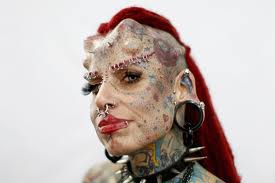 It’s true that humanity has been doing this as long as we’ve been building shelters and making things. Stuff…adornments, decorations, artifacts are what define civilizations. It’s an inherent part of our nature. Otherwise we wouldn’t have a vibrant fashion industry, laws and rules throughout the ages regulating clothing and dyes and styles, nor many types of jewellery. So, yes humans have been decorating themselves forever and continue to do so except for those religions that try to suppress human nature.

But a pure body modification is not necessarily adornment. Sometimes it’s a medical necessity, such as a disfigurement that is painful or limiting of a person’s movement. It might be surgery after an illness, disease or accident that requires a modification. Or it might be for decoration. Obviously, piercings modify the body’s structure to some degree. Any piercing you can see is one of decoration, though it can mean more. Those that you can’t see, such as breasts, genitalia or the subcutaneous implants might be body adornment as well. Like I said, some people do these piercings for ritualistic or fetishistic reasons. It may give them a sexual thrill, indicate they are into some form of fetishistic situation such as domination or submission, be a form of emotional catharsis, or be part of a religious practice.

Skin whitening can be done to remove discolorations caused by sun or birthmarks but do you really need it where the sun don’t shine? Creative Commons: Tribune

This sort of worry is what creates a society where anorexia runs rampant, where we’re stuck on any flaw or imperfection as bad because we watch movies or look at magazines where people are lit, done up in make up and airbrushed to godlike proportions. Relationships become harder to maintain because they’re based on superficial forms of attraction. This isn’t about being confident; it’s about lacking confidence so much that you worry about what anyone will think of every aspect of your body.

We’re losing perspective. Personality and being human is what really matters, and going down the road of worrying about the shade of your genitalia, how your pubic hair curls, whether your toenails grow the right thickness and if your neck is long enough is trying to change how we were born. It’s an unending battle and a slippery slope. Michael Jackson is a fine example of someone who couldn’t stop trying to be someone else, to the point of having extreme cosmetic surgery and bleaching his skin so he looked less black. His talent was in his voice and his musical skills. His downfall was in his quest to be someone else.

One response to “Body Adornment or Modification”