Click on the above picture to go to the album.

Well, it seems a year after my travels I’m still going through photos. Life just got busy and I got distracted. So, tracking back in time, I needed to get to Calais from Belgium because I had to catch the Dover ferry to England and then get to Brighton for the British Fantasy Convention, held at the beginning of October. 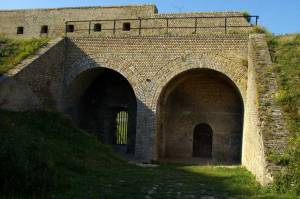 The bunker in Calais. I’m not sure if it’s from the first or second World Wars.

There were ferries closer to where I was in Belgium but it turned out none took foot passengers except for the Dover ferry. By this time, I was getting a cold and my feet were actually blistered from walking so much. I was a bit tired. The train to Dover from Ghent took 2-3 hours with a stop in Lille. It was a beautiful clear day in Calais, a fairly modern looking city but then it was probably bombed a fair amount during WWII. I stayed in the Hotel Richelieu, a very short walk from the station and run by a man who was slowly renovating each suite. Breakfast was included but  declined as I needed to get up early the next morning to catch the ferry. 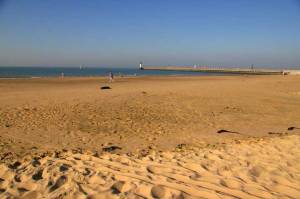 I wandered down to the beach, passing a bunker that I explored. It was sealed but obviously left over from the war. The beach itself was this amazing very fine-grain beige sand. I took my shoes off and walked into the water to soothe my feet. I wandered after that, taking a few pictures, then stopped in a cafe. I thought, because I was in France I would find cider, and using my very sad French, prefacing it first with “My French is not very good” (in French) I asked, “Vous avez cidre de pomme?” My answer was “quoi?” by a rather rude waiter (who tried his best to ignore me). I repeated and he said non so I ordered a glass of red wine. When it came time to pay the bill,  and I didn’t understand what he said, he reverted to English.

Later, when I wandered into a chocolate shop and repeated the experience I began to suspect that the people of Calais won’t speak English if they can get away with it. With ferries from England you can expect that they deal with English daily and maybe it’s a resistance to assimilation or the belief, when in France do as the French. I at least tried but they certainly didn’t give much for trying.

The very large floral peacock on the main street in Calais.

I didn’t have time or energy to explore farther afield but Calais seems a small resort town. I found what I thought was city hall, with a lovely floral garden and a foliate peacock across the way. That evening I went to Le Restaurant Ancienne and had sea bream with balsamic rucola (arugula), tomatoes, bell peppers and mashed potatoes. Dessert was creme brulee with caramelized strawberries and lemon. It was creamy and all very good but too much for me to finish. In Europe so far, I found that unless you were ordering a bottle of wine, restaurants only have one choice by the glass.

The next morning I took a taxi to the ferry dock. I’m very glad I did as it turned out to be a very long and winding way. I would probably have missed the ferry and been exhausted. It didn’t cost that much for a taxi and I had a pleasant enough journey chatting with a man and his sons. The ferry ride was about three hours and for some reason, none of the sites seemed to have given an accurate time for the crossing.  I got to see the white cliffs of Dover but had no time to dally on the other side and made my way to Brighton.

The only ferry that takes foot passengers is in Calais. The Belgian ferries are only for cars.