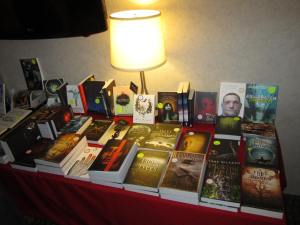 Chizine’s table at the room party.

When Words Collide is a writing convention in Calgary, Alberta, organized by Randy McCharles and a host of helpers. This was its second year in the making and it’s growing too big for the Best Western it was held at. There were a host of panels and a moderate sized dealers room for various publishers to sell their wares. While there was a heavy accent on the speculative in the panels there were also mystery and romance panels. The romance writers had their own party and IFWA (Imaginative Fiction Writers Association) of Calgary was present.

There are cons that are professional track and some that have fan tracks. WWC is a professional track, with some readings, panels about writing and publishing and parties held by publishers. I combined a trip to Alberta to visit family and friends, and to meet some of the writers I knew through email but had not met in person. I could spend time with friends, participate in writing related fun, and yes, the Aurora Awards were held at this event.

I’m actually a bad convention goer. I go to conventions and talk and drink with 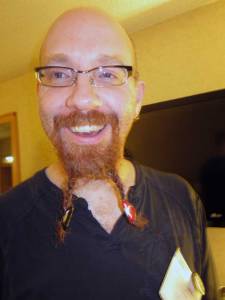 Brett Savory, writer, and publisher of CZP at one of the happy room parties.

people, visit the parties and maybe get to a panel or two. This time I was on a good size of panels so felt less inclined to go to other ones. I had intentions of going to a reading or sitting in on a panel discussion but I only made to part of one reading. I did do a combined reading with Bob Stallworthy who read some really excellent poetry, and Susan Forest, who read part of a story that is up at Beneath Ceaseless Skies. She was also up for a short story Aurora. I read two poems and part of a story, and not too good a reading since I was a little foggy from the parties the night before.

I also did a  live-action slush reading which involved people handing in the first page of a story. Guest of honor Jack Whyte would read the page in his lovely deep, accented baritone. When we as editors would have stopped reading a submission we put up our hands and said why. In truth I have a habit of trying to read through a full submission because sometimes a writer will hit their stride after a while and just needs some editing. The writing might be sucky but they idea might be great and it might be worth salvaging. The panel also had Susan Mac Gregor and Hayden Trenholm. 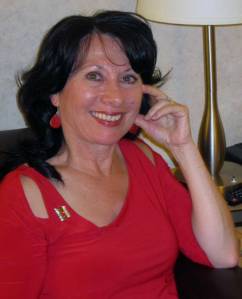 The panel I sat on about poetry and how not to make it boring turned out way better than I thought it would. Poetry has a bad rep of being inaccessible. Sandra Kasturi is a great moderator and there were enough people in the audience so it went well with input from the audience and the panel. The panelists meshed well and the audience seemed interested.

The parties and the liquids were plentiful, and Bundoran, Tyche, Edge and ChiZine were some 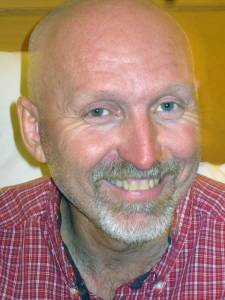 Derryl Murphy was one of the nominees in the Aurora novel category.

of the publishers throwing parties. Jack Whyte had to leave early Saturday morning due to an emergency but he was the hub of a scotch party, which involved four bottles of scotch and a lot of pretty interesting talk about sex and writing and all sorts of things. There wasn’t a drop left by the end of the night but there were a few green faces in the morning. 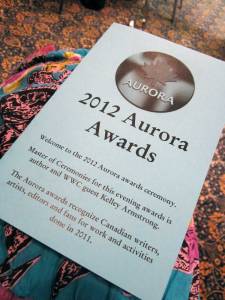 The Aurora Awards were presented at the convention and the list can be found on their website.

in the past. This is a great convention for the new or established writer, and for fans who want to take in a few readings and the parties. Next year’s convention will be August 9-11, in Calgary.

The Aurora Awards ceremony was held Saturday night after the banquet. The list of winners can be found on the site. While I was nominated in poetry I didn’t win, but Helen Marshall won for Skeleton Leaves. Her poetry is excellent and anyone should pick up this gem published by Kelp Queen Press. It was worthy of winning.  Oh, and Randy McCharles won for his organization of the When Words Collide in 2011.

One response to “When Words Collide Writing Convention”