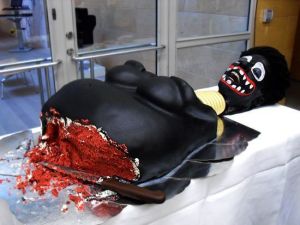 A lot of controversy over this horrific image at a Swedish art show. Picture via: Frihetssmedjan

When a friend posted a picture of a bunch of laughing women cutting into a cake shaped like the caricatured torso of a black woman I was shocked, and like many others, saying WTF? The artist of this piece Makode Aj Linde in Sweden does various performances and art that look at racial stereotyping. The “cake” actually has the artist’s head sticking through, where he is done up in blackface. Swedish Minister or Culture Lena Adelsohn Liljeroth was asked to cut into the genitals to enact a clitoridectomy. The artist screamed and shrieked as this was done, with the rather gory, red cake interior revealed.

I thought this was only a torso but there are vestigial arms across the ponderous breasts. The artist’s head is done up in black face with a large cartoonish mouth. Many of the pictures show people laughing, taking pictures and eating the cake. The articles were somewhat biased with titles like “nig*ger cake,” “racist cake” and Lena as a  “self-confessed ‘anti-racist.'” The backlash was incredible and ironic since Liljeroth had been invited by the Swedish Art Organisation to speak about artistic freedom and the right to be provocative. Linde’s piece was definitely provocative but if I was an art critic I’d say it didn’t quite come off the way he was expecting.

On first glance we have three affronts: a doubly racist cake with the black person laying there, the black face upon the head, and then the mutilated cake torso smacking of outright cannibalism. On second glance we have people partying and eating the cake, disturbing considering the focal point. As I delved deeper I found a video that showed the artist screaming as the cake is cut. Several friends who viewed this changed their opinions from one of outraged effrontery to admiration because they were chilled by what they saw.

Little Black Sambo is another racial stereotype: the big lips, white eyes and the watermelon.

As a provocative piece Aj Linde’s piece excelled. It definitely has provoked people to call for the Swedish minister’s resignation. It has outragedthe Association of African Swedes. Did it bring attention to the brutal act of genital mutilation? Yes, it did that too. But that seems secondary to the rest and was in all senses poor taste. Maybe there is no other truly effective way. I could see the human torso cake perhaps at a Hallowe’en party but as a means to highlight female mutilation, it could have stopped before people started eating the cake. What was the point of that? There are some stereotypes of Africans being cannibals and putting people in stewpots, but did that come across? And maybe most disturbing of all is that everyone overall seems to ignore the horrificness of such a cake and just party it up.

Is the laughter nervousness at being confronted with the uncomfortable thought of female genital mutilation? Is it a sign of people oblivious to events outside their purview? Is it a sign of blatant racism? Is it a sign of numbness to all the horrors in the world today? Is it narrow mindedness (if it’s not about me, it’s not important)? Maybe it’s all of these. It certainly is disturbing to me. For anyone who wants another look at female circumcision in terms of fiction, read Alice Walker’s Possessing the Secret of Joy, which might have been one of the first widely read accounts of such a practice.

Was this performance piece successful in what Aj Linde hoped to get across? All I can think is that in some ways, yes it was, though I think it misfired. I think a piece that mimicked the circumcisions with the screaming would have worked without the cake, but maybe the promise of a tasty confection drew everyone in at the end. If nothing else, this certainly did support an artist’s right to provoke.