Today was another quinoa and  mole (molay, not moles) day. There was only about 1/2 cup of mole and likewise for the quinoa so I was pretty hungry by the time I got home, almost hungry enough to eat brains! Actually, if my freezer was filled with nothing but kidneys, brains, tripe, heart, tongue and all those other organ meats I would rather go outside, gnaw trees and take my chances with the zombies. They can have the organs. Blech!

For dinner I used up the rest of the quinoa with some steamed broccoli, carrot and garlic, and the last tablespoon of the earlier curry sauce. I finished off the last of a jar of Indian pickle. This stuff is extremely salty and I overdid it, making my meal very so-so. My stomach actually was growling at me (mistaking me for a zombie meal) when I went to bed.

Breakfast was  handful of hazelnuts and about 1/4 cup of pomegranate juice. The juice keeps quite well and I’ll be able to drink it for a while for fruity goodness. I took some homemade frozen gumbo out of the freezer for lunch. It’s a year-old batch and nearly the last. Gumbo is a Louisiana dish, made with a roux, which is  flour and oil stirred over a medium heat until it turns peanut butter color. Then you add your vegetables (tomato, onion, peppers, green beans, carrots, garlic, okra, etc.) and shrimp and sausage. I used turkey sausage. Some gumbos are more like soup and some like stew. With the red and white rice I added, it became more stewlike. Very filling and not low calorie. I’ll have to find a low fat version in the future.

My fridge is a type that sucks the moisture out of the air so vegetables can indeed keep for several months without going bad. Often jars of pickles and jams will start to lose their labels because the air is so dry in the fridge, and that’s saying something in the Pacific NW where there is often a lot of rain. 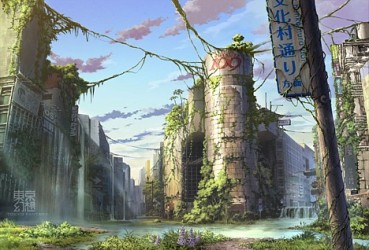 What will you be eating during the Apocalypse? Creative Commons: Tokyo Genso pinktentacle.com

For dinner, I did notice the baby bok choy starting to turn so I stir fried it with enoki mushrooms, lotus root, carrots garlic, onion, fish sauce, soy sauce with scallops on rice. At the local watering hole tonight there was evidence of zombie activity. Glassy eyed beings stumbling and slurring. They seemed to be out in full force. I managed not to get infected and made it home in the light smattering of snow. Zombies probably like colder weather since it preserves their body parts better.

Breakfast was about two tablespoons of leftover rice, with a tablespoon of peanut butter and chocolate chips. Think of it as a variation on rice pudding. The hard part was when I went to work out, I also walked up to the Drive to window shop. I often go shopping for food on Saturdays, and maybe snacks and because I hadn’t yet eaten lunch it was very hard to not go and pick up some food. But so far, I’ve bought no food to bring home.

I had the last of my stir fry veggies with scallops for lunch. Dinner was at a friend’s involving cheese, crackers, meats and lots of garlic. I came home with a bag of roasted garlic.

Breakfast, something I’m never good at, didn’t really happen because I slept in. So for lunch I found some perogies in the freezer and fried them up with mushrooms, onion, chive tops, garlic and sun-dried tomatoes in oil. Dinner consisted of some of the frozen shepherd’s pie from before.

I do worry that my starch intake is higher than it would be on my normal eating pattern. This makes me think about how poor people are often overweight, because their diets are low priced and carbohydrate heavy to fill them up. While vegetables are relatively cheap, they don’t necessarily fill you up the same way.

For those just popping in, the apocalypse happened on January, 1, 2012, just in time for people to freak out about the Mayan calendar. Of course, since the Mayan calendar actually shows the ending of one age and the beginning of another, maybe it’s now the Zombie Age (we’ve already had the consumer age).

I’m pretending that an apocalypse takes place (maybe it’s a supervirus, massive alien abductions or an evil plot), which stops the supply lines (but for the sake of staying healthy and clean, the hydro-electric power and water are still working). I am documenting how long I can live on the food in my place, without shopping. Here are my rules: